Parents are a key part of children’s lives everywhere, but how parents view their role and their approaches to discipline and punishment vary widely. First, we look at an influential model of parenting “styles” based on American parenting, then we look at views of parenting based in other cultures.

LO 6.16 Specify the four types of parenting “styles” and identify the cultural limitations of this model.

Have you heard the joke about the man who, before he had any children, had five theories about how they should be raised? Ten years later he had five children and no theories.

Well, jokes aside, most parents do have ideas about how best to raise children, even after they have had children for awhile (Harkness et al., 2015; Tamis-LeMonda et al., 2008). In research, the investigation of this topic has often involved the study of parenting styles; that is, the practices that parents exhibit in relation to their children and their beliefs about those practices. This research originated in the United States and has involved mainly American children and their parents, although it has now been applied in some other countries as well.

For over 50 years, American scholars have engaged in research on parenting styles, and the results have been quite consistent (Bornstein & Bradley, 2014; Collins & Laursen, 2004; Maccoby & Martin, 1983). Virtually all prominent scholarship on parenting has described it in terms of two dimensions: demandingness and responsiveness (also known by other terms such as control and warmth). Parental demandingness is the degree to which parents set down rules and expectations for behavior and require their children to comply with them. Parental responsiveness is the degree to which parents are sensitive to their children’s needs and express love, warmth, and concern.

Various scholars have combined these two dimensions to describe different kinds of parenting styles. For many years, the best known and most widely used conception of parenting styles was the one articulated by Diana Baumrind (1968, 1971, 1991). Her research on middle-class White American families, along with the research of other scholars inspired by her ideas, has identified four distinct parenting styles (Collins & Laursen, 2004; Maccoby & Martin, 1983; Pinquart, 2017; Steinberg, 2000).

Permissive parents are low in demandingness and high in responsiveness. They have few clear expectations for their children’s behavior, and they rarely discipline them. Instead, their emphasis is on responsiveness. They believe that children need love that is truly “unconditional.” They may see discipline and control as having the potential to damage their children’s healthy tendencies for developing creativity and expressing themselves however they wish. They provide their children with love and warmth and give them a great deal of freedom to do as they please.

Disengaged parents are low in both demandingness and responsiveness. Their goal may be to minimize the amount of time and emotion they devote to parenting. Thus, they require little of their children and rarely bother to correct their behavior or place clear limits on what they are allowed to do. They also express little in the way of love or concern for their children. They may seem to have little emotional attachment to them. Table 6.1 provides a summary of the four styles of parenting.

The Effects of Parenting Styles on Children

A great deal of research has been conducted on how parenting styles influence children’s development. In general, authoritative parenting is associated with the most favorable outcomes, at least by American standards. Children who have authoritative parents tend to be independent, self-assured, creative, and socially skilled (Baumrind, 1991; Collins & Laursen, 2004; Steinberg, 2000; Williams et al., 2009). They also tend to do well in school and to get along well with their peers and with adults (Hastings et al., 2007; Spera, 2005). Authoritative parenting helps children develop characteristics such as empathy, optimism and self-regulation that in turn have positive effects on a wide range of behaviors (Jackson et al., 2005; O’Reilly & Peterson, 2014; Purdie et al., 2004).

All the other parenting styles are associated with some negative outcomes, although the type of negative outcome varies depending on the specific parenting style (Baumrind, 1991; Pinquart, 2017). Children with authoritarian parents tend to be less self-assured, less creative, and less socially adept than other children. Boys with authoritarian parents are more often aggressive and unruly, whereas girls are more often anxious and unhappy (Bornstein & Bradley, 2014; Russell et al., 2003). Children with permissive parents tend to be immature and lack self-control. Because they lack self-control, they have difficulty getting along with peers and teachers (Linver et al., 2002). Children with disengaged parents tend to be impulsive. Partly as a consequence of their impulsiveness, and partly because disengaged parents do little to monitor their activities, children with disengaged parents tend to have higher rates of behavior problems (Pelaez et al., 2008). Table 6.2 provides a summary of the different child behaviors associated with each of the four styles of parenting.

Although parents undoubtedly affect their children profoundly by their parenting, the process is not nearly as simple as the cause-and-effect model just described. Sometimes discussions of parenting make it sound as though Parenting Style A automatically and inevitably produces Child Type X. However, enough research has taken place by now to indicate that the relationship between parenting styles and children’s development is considerably more complex than that (Bornstein & Bradley, 2014; Lamb & Lewis, 2005; Parke & Buriel, 2006; Pinquart, 2017). Not only are children affected by their parents, but parents are affected by their children. This principle is referred to by scholars as reciprocal or bidirectional effects between parents and children (Combs-Ronto et al., 2009). 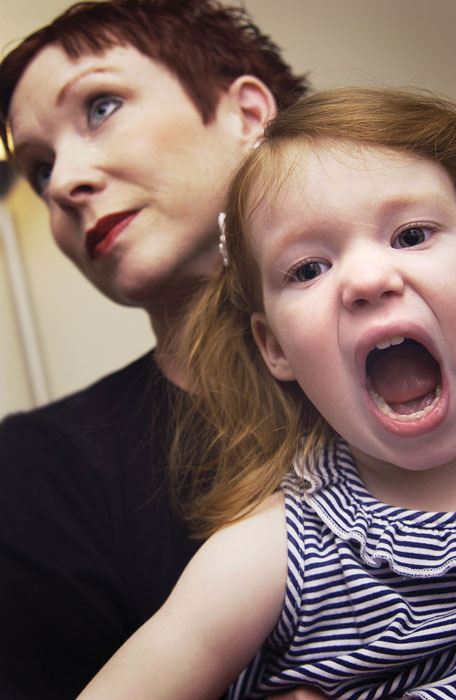 How does the idea of reciprocal effects complicate claims of the effects of parenting styles?

Recall our discussion of evocative genotype → environment effects in Chapter 2. Children are not like billiard balls that head predictably in the direction they are propelled. They bring personalities and desires of their own to the parent–child relationship. Thus, children may evoke certain behaviors from their parents. An especially aggressive child may evoke authoritarian parenting; perhaps the parents find that authoritative explanations of the rules are simply ignored, and their responsiveness diminishes as a result of the child’s repeated disobedience and disruptiveness. An especially mild-tempered child may evoke permissive parenting, because parents may see no point in setting specific rules for a child who has no inclination to do anything wrong anyway.

Does this research discredit the claim that parenting styles influence children? No, but it does modify it. Parents certainly have beliefs about what is best for their children, and they try to express those beliefs through their parenting behavior (Alwin, 1988; Harkness et al., 2015; Way et al., 2007). However, parents’ actual behavior is affected not only by what they believe is best but also by how their children behave toward them and respond to their parenting (Knafo-Noam et al., 2019). Being an authoritative parent is easier if your child responds to your demandingness and responsiveness with compliance and love, and not so easy if your love is rejected and your rules and the reasons you provide for them are rejected. Parents whose efforts to persuade their children through reasoning and discussion fall on deaf ears may be tempted either to demand compliance (and become more authoritarian) or to give up trying (and become permissive or disengaged).

So far we have looked at the parenting styles research based mainly on White middle-class American families. What does research worldwide indicate about parenting and its effects in early childhood?

One important observation is the rarity of the authoritative parenting style (Bornstein & Bradley, 2014; Harkness et al., 2015). Remember, a distinctive feature of authoritative parents is that they do not rely on the authority of the parental role to ensure that children comply with their commands and instructions. They do not simply declare the rules and expect to be obeyed. On the contrary, authoritative parents explain the reasons for what they want children to do and engage in discussion over the guidelines for their children’s behavior (Baumrind, 1971, 1991; Steinberg & Levine, 1997).

Outside of the West, however, this is an extremely rare way of parenting. In traditional cultures, parents expect their authority to be obeyed, without question and without requiring an explanation (LeVine et al., 2008; LeVine & LeVine, 2016). This is true in nearly all developing countries as well as developed countries outside the West, most notably Asian countries such as Japan and South Korea (Tseng, 2004; Zhang & Fuligni, 2006). Asian cultures have a tradition of filial piety, meaning that children are expected to respect, obey, and revere their parents throughout life (Lieber et al., 2004; Lum et al., 2016). The role of parent carries greater inherent authority than it does in the West. Parents are not supposed to provide reasons why they should be respected and obeyed. The simple fact that they are parents and their children are children is viewed as sufficient justification for their authority.

In Latin American cultures, too, the authority of parents is viewed as paramount. The Latino cultural belief system places a premium on the idea of respeto, which emphasizes respect for and obedience to parents and elders, especially the father (Cabrera & Garcia Coll, 2004; Espinoza-Hernández et al., 2017). The role of the parent is considered to be enough to command authority, without requiring that the parents explain their rules to their children. Another pillar of Latino cultural beliefs is familismo, which emphasizes the love, closeness, and mutual obligations of Latino family life (Halgunseth et al., 2006).

Does this mean that the typical parenting style in non-Western cultures is authoritarian? No, although scholars have sometimes come to this erroneous conclusion. It would be more accurate to state that the parenting-styles model is a cultural model, rooted in the American majority culture, and does not apply well to most other cultures. Of course, children everywhere need to have parents or other caregivers provide care for them in early childhood and beyond, and across cultures parents provide some combination of warmth and control. However, “responsiveness” is a distinctly American kind of warmth, emphasizing praise and physical affection, and “demandingness” is a distinctly American kind of control, emphasizing explanation and negotiation rather than the assertion of parental authority. Other cultures have their own culturally based forms of warmth and control, but across cultures, warmth rarely takes the American form of praise, and control rarely takes the American form of explanation and negotiation (Harkness et al., 2015; Matsumoto & Yoo, 2006; Miller, 2004; Wang & Tamis-LeMonda, 2003).

Even within American society, the authoritative style is mainly dominant among White, middle-class families (Bornstein & Bradley, 2014). Most American minority cultures, including African Americans, Asian Americans, and Latinos, have been classified by researchers as “authoritarian,” but this is inaccurate and results from applying to them a model that was based on the White majority culture (Chao & Tseng, 2002). Each minority culture has its own distinctive form of warmth, but all tend to emphasize obeying parental authority rather than encouraging explanation and negotiation. Hence the White, middle class, American model of parenting styles cannot really be applied to them.

Within cultures, parenting varies depending on the personalities of the parents, their goals for their children, and the characteristics of the children that evoke particular parenting responses. Overall, however, the dominant approach to parenting in a culture reflects certain things about underlying cultural beliefs, such as the value of interdependence versus independence and the status of parental authority over children (Giles-Sims & Lockhart, 2005; Harkness et al., 2015; Hulei et al., 2006). The cultural context of parenting is so crucial that what looks like the same parental behavior in two different cultures can have two very different effects, as we will see in the next section.